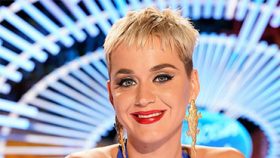 From hot pink hair to black lips, Katy Perry has become known for fearlessly dabbling in a range of beauty looks. In fact, her new gig as the host of American Idol epitomizes her exploratory approach to all things beauty, as she’s already sported baby bangs with her cropped pixie, bold red lips and more — and that’s just in week one of the competition.

And while her look may change all the time — for example, when she works on Idol, she tells PeopleStyle that her look is “classic with a twist, to last all day,” whereas when she’s on tour, she goes for “retro space age boldness,” and everyday, it’s “all me with a pop of gloss or a lash” — the 33-year-old singer assures that all of her beauty decisions all come from within.

That means nothing, including who she’s dating, can influence her looks, however bold or subdued they may be. “My makeup is an expression of who I am and who I’m trying to be, not a reflection of who I’m with,” says the star, who just launched her third makeup collection with CoverGirl.

She hasn’t always been this way, she notes. “When I was younger, I’d wake up early to make sure I had a full face of ‘natural look’ first thing in the morning,” she shares with PeopleStyle. “That’s a couple hours of sleep I’ll never get back!” Not anymore. Now, she loves her range of looks, and owns it. “I love makeup’s power to transform and empower,” she says.

Perry, who is currently in the middle of her Witness tour in South America, recently sparked rumors that she and ex-boyfriend Orlando Bloom are dating once again, after the two were spotted sightseeing together in Prague. And the singer solidified those rumors again last week, when she stepped out wearing a onesie with Bloom’s face all over it, a look the actor had worn himself.

But no matter their status, one thing’s for sure, she’s not changing her beauty look for him.

With reporting by Jackie Fields