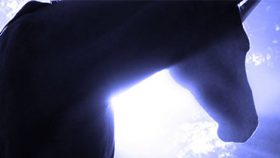 What mythological creature has been more beloved over the centuries than the unicorn? Symbols of purity and enchantment, unicorns are loved by both children and adults alike and are integral parts of many fairy tales and legends. For all the roles they’ve played in literature, cinematography, and art as a whole, unicorns more than deserve their own day!

Unicorns were mentioned as far back as antiquity—ancient Greek writers believed they lived in the faraway and exotic country of India, which was then largely unknown to Europeans. However, the unicorn was then thought to be a powerful, fierce animal that was not to be meddled with. In the Middle Ages, the unicorn’s image was based greatly on Bible passages that were thought to speak of these animals, and unicorns slowly came to be seen as a symbol of strength, the purest kind of love, and the pets of virgin women. In fact, there is even a sculpture of the Virgin Mary holding a unicorn on her lap and patting it in Warsaw’s National Museum. Thus, unicorns have been appearing in works of literature for thousands of years. The most prominent more modern examples include Lewis Carroll’s Through the Looking Glass, J.K. Rowling’s Harry Potter and the Philosopher’s Stone, and The Last Battle by S.C. Lewis. The whole immensely popular My Little Pony franchise is also based on unicorns.

Unicorn Day was created to celebrate these majestic creatures and help adults remember how much more fun life can be when we let a little magic in sometimes.

How to Celebrate Unicorn Day

The best way to celebrate this day would be to find a fun, fanciful activity. How about inviting some friends over to bake colorful cupcakes you can then top with colorful icing and sprinkles? We’re also willing to be bringing in a plate of those to work would make you everyone’s favorite person in no time! Never made cupcakes before? No problem—just follow this simple recipe.

Directions:
Preheat the oven to 180C and line a 12-hole muffin tin with paper cases.
Cream the butter and sugar together in a bowl until pale. Beat in the eggs a little at a time and stir in the vanilla extract. Fold in the flour using a large metal spoon, adding a little milk until the mixture is of a dropping consistency. Spoon the mixture into the paper cases until they are half full. Bake in the oven for 10-15 minutes, or until golden-brown on top and a skewer inserted into one of the cakes comes out clean. Cool for 10 minutes and then until cooled completely on a wire rack.
For the icing, beat the butter in a bowl with half the icing sugar until smooth. Then, add the remaining icing sugar with a bit of the milk, and beat until the mixture is smooth and creamy. Lastly, add the food coloring and mix until well combined. Using a piping bag with a star nozzle, pipe the icing onto the cooled cupcakes. And voilà! Delicious cupcakes that are as cute a a button!

Another activity that could be perfectly suited to this day would be sitting down to watch a good fantasy film, preferably one that includes unicorns, of course! It’s likely to have been a long time since you’ve watched The Chronicles of Narnia…

Unicorn Day is the perfect day to remember how tales of magic and and enchantment influenced your imagination as a child.