NYFW Fall 2018: The Best Hair and Makeup Looks on the Runways This Season 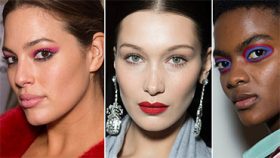 As someone who’s covered fashion week in New York, Milan, and Paris for over seven years, I’ve come to expect the expected at NYFW: Lots of ponytails, lots of “undone waves,” and very little makeup. Filled with much sportswear than its European counterparts — and inspired way more by streetwear and our American obsession with athleisure —  it’s no surprise that the beauty aesthetic on the New York runways is much simpler and “sportier,” as the people backstage like to call it. But the Fall/Winter 2018 season was a little different. I could sense it from the first show, at Tom Ford, where models wore glimmering gunmetal shadow and big leather headbands with their hair piled on top of their heads. There was something glamorous and exciting in the air (and no, it wasn’t just the loads of Tom Ford perfume I was inhaling backstage). And that energy continued through the week. We saw makeup artists taking risks, hairstylists breaking out nostalgic hair accessories, and a whole lot of sparkle across the board. It was entirely unexpected, but very much appreciated by every beauty editor in the room. Below are the Fall 2018 hair and makeup moments that got us most inspired this season.
Tom Ford

A sooty, sparkly eye, clumpy lashes, and one badass leather headbands brought to mind the beauty trends of the ’60s. But because hairstylist Orlando Pita piled the ends of the hair on top of the head, and makeup artist Pat McGrath held back on the foundation and concealer, the look took on a decidedly 2018 vibe.

Marc Jacobs ended fashion week with a bang. Not only did several models get major haircuts by Guido, but they also got major subversive rainbow dye jobs courtesy of London-based colorist Josh Wood. On top of that, he debuted an exciting new shadow that’s basically pressed glitter in a pan, which makeup artist Diane Kendal stretched across the lids using a mix of her fingers and a brush.

Makeup artist Tom Pecheux crafted a makeup look that was high on glamour, but not so extravagant that you couldn’t do it on your own at home. Using gold lip gloss and an angled lip brush, Pecheux traced the Cupid’s bow of the lips, topping that with silvery-white glitter to add strobe-levels of shine. Then he painted the lips with M.A.C. Retro Matte Liquid Lipcolour in Feel So Grand. Little foundation and lots of mascara completed the look.

I love a voilette — whether on the runway or at a royal wedding – and the heart-studded option at Adam Selman is no exception. As for the makeup, master Dick Page described the look as “glam-punk,” and broke out his new favorite blush to create it. M.A.C.’s forthcoming Mineralize Blush in Flirting With Danger is “a good mean brick red,” according to the makeup artist, and out this spring.

A Cushnie et Ochs dress will cost you over $1,000. But that gorgeous burgundy lipstick picture you can nab for under $20. Makeup artist James Kaliardos used Maybelline New York SuperStay Matte Ink Liquid Lipstick in Voyager, which he then topped with the new Lip Studio Python Metallic Lip Kit in Passionate. Check out all the Lip Python shades in our review, here.

Maybelline’s new Lip Python kits made a second appearance at NYFW, this time at Self Portrait (the shade is Untamed). After laying down the green, makeup artist Thomas de Kluyver then tapped a custom-blended plum color in the center of the lips, which he described as a “glam version of grunge.”

It was an explosion of color backstage at Chromat, where makeup artist Fatima dipped into M.A.C. brightest, most-pigmented products: Acrylic Paints for the eyes and Lipmix on the mouth.

Five of the models at Sies Marjan’s fall 2018 show received a dual-toned eye look courtesy of de Kluyver, who used both M.A.C. Pro Chromacakes and Chromaline. “The products have different textures, giving a slight separation between two,” he explained.

Anna Sui served as her own muse for the beauty look, with McGrath and hairstylist Garren referencing an image of the designer from the ’80s. The result was this voluminous side flip and graphic pink-and-purple shadow look, which may feature a new launch from McGrath).

Two-toned eyes at Christian Siriano combined a shock of hot pink along the top lids and smoky black underliner along the lower lashes. Makeup artist Polly Osmond dipped into the designer’s new collection with E.l.f. Cosmetics to create the look, using both the lipsticks and the eye shadow palette.

Over the past year, makeup artist Romy Soleimani has been thinking outside of the box when it comes to makeup looks. For our December 2017 issue, she glued bedazzled appliques, which she bought at a bead and trimmings store in New York City, onto Amber Heard’s eyes. At Kate Spade’s fall 2018 show, just two months later, she broke out Swarovski crystals which she placed onto the lids with lash glue and a pair of tweezers. “Millennial Dolly Parton,” was how she described the look.

Playing off the shocks that punctuated Wu’s fall 2018 collection, De Kluyver created this “deconstructed liner” look using black gel eyeliner and the yellow, orange, and pink shadows from Maybelline New York’s new Lemonade Craze shadow palette. “I didn’t want it to look like a sharp liquid liner,” said De Kluyver. “I like the idea of makeup being something that you use to be playful.”

If Vidal Sassoon lived in 2018 and liked to go to EDM festivals, he would have given everyone haircuts that looked like this neon bob. Major props to hairstylist Eugene Souleiman and makeup artist Kabuki for this major beauty look, which also involved literal 3D wings (which felt like cardstock) that jutted out from the models’ brow bones.

Hairstylist Anthony Turner broke out yet another throwback hair accessory — the accordion headband (a.k.a. the circle headband, a.k.a. the plastic stretch band). “They’re actually surprisingly hard to find because nobody uses them anymore,” said Turner. “I saw one in Ricky’s and I needed 50. Luckily, you can still get them on Amazon Prime.”

Guido called it the “banana clip.” I remember calling it the claw clip. And depending on what decade you were born in, you may not call it anything because you don’t even know what the hell I’m talking about. Regardless, for his last show during the tradition ready-to-wear schedule, Wang brought back the old-school hair accessory that all of a sudden feels totally new and cool.

Classic beauty — demure smoky eyes and a romantic updo — was expected for Herrera’s last show before stepping down from her namesake brand. A shock? The glinty blue hue (M.A.C. Modern Twist Kajal Liner in Ocean plus M.A.C. Pigment in Naval Blue) that makeup artist Diane Kendal chose for the outer corners of the eyes, adding an edge to hairstylist Odile Gilbert’s twisty chignon.

This terracotta-colored lipstick is the only shade I want to wear from now on. Kaliardos lined and filled in the lips with Maybelline New York Color Sensational Lip Liner in Rich Chocolate, followed by a layer of the brand’s SuperStay Matte Un-Nude Liquid Lipstick in Fighter, creating a hue he called “sophisticated spice.”

Soleimani truly outdid herself this fashion week, this time applying real gold leaf all over the lids in lieu of eye shadow. As for the hair, Esther Langham gave us major Little House on the Prairie vibes with the inside-out braids and basket she came up with.