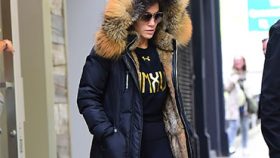 On Wednesday, Jennifer Lopez stopped by the gym in Miami with her boyfriend Alex Rodriguez—a normal enough activity for a couple that’s practically inseparable, except that while Rodriguez simply carried a cup of coffee, Lopez notably held aa $18,500 Hermès leather tote, which presumably served as her gym bag. (And which hopefully was kept not in a locker while the pair worked up a sweat, but in a safe.) Lopez, however, is hardly alone in overdressing when it comes to the gym, which is understandable enough when you consider that it’s one of paparazzi’s favorite spots to catch stars off-guard—and, of course, looking less than camera-ready. There are some who have a less subtle approach—Gigi Hadid and Hailey Baldwin have both worked out in highly coveted pairs of Yeezy, and Kendall Jenner usually keeps it rather minimal with a teeny Louis Vuitton bag—while others prefer to go all or nothing. When Lady Gaga, for example, was on a Bikram yoga kick a few years ago, she’d show up to and somehow emerge from the humid, 95 to 108-degree studio with her hair perfectly coiffed, wearing designer pieces and pairings like a leotard and fishnets—the latter of which also happens to be an ensemble favored by Mariah Carey, who posted a series of Instagrams of herself similarly dressed for a workout last year. Take a look back at all of their perfectly sweat-free athluxury, here.

4/24 Taylor Swift in lipstick and platform heels, carrying a Tod’s bag, outside of her gym in New York, July 2014.

5/24 Mariah Carey in high heels, fishnets, a leotard, and a gold necklace at the gym, February 2017.

8/24 Victoria Beckham getting a workout in while wearing a pair of wedges and throwing the first pitch at the Los Angeles Dodgers vs. New York Mets game at Dodger Stadium, June 2007.

9/24 Kim Kardashian walking her daughter North West, who’s wearing a purple tulle dress and heels, on the way to the gym in New York, September 2015.

10/24 Lady Gaga in a fuschia satin dress, wraparound sunglasses, and a beehive leaving a Bikram Yoga class in London, November 2010.

11/24 Taylor Swift once again in lipstick and platform heels, carrying a Tod’s bag, outside of her gym in New York, July 2014.

17/24 Lady Gaga in leather gloves, Chanel sunglasses, fishnets, and a leotard outside of a yoga studio in Madrid, December 2010.

19/24 Kim Kardashian in a Yeezy leather jacket and Kanye West in a tightly wrapped bandana leaving the the gym in Paris, May 2014.

20/24 Kendall Jenner carrying a Louis Vuitton fanny pack outside of a gym in New York, August 2017.

22/24 Kanye West in another tightly wrapped bandana leaving the the gym in Paris, May 2014.