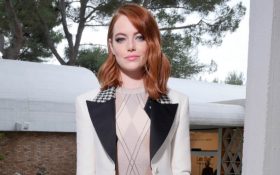 Louis Vuitton clearly got into the spirit of its 2019 resort collection. The French fashion house, helmed by creative director Nicolas Ghesquière, chose the idyllic hilltop village of Saint-Paul-du-Vence, located in the heart of the French Riviera, to stage its runway show yesterday. Talk about fashion with a view.

Held within the sculpture garden at the Fondation Maeght museum — where the models mingled with priceless Giacometti and Miró pieces — the event attracted a number of celebrities including Jennifer Connelly, Justin Theroux, Léa Seydoux and Mark Ronson. Actresses Sophie Turner, Sienna Miller and Emma Stone held court in the front row, all stylishly dressed in Louis Vuitton frocks.

“Game of Thrones” star Turner — who announced her engagement to Joe Jonas last year — went for a bold mix of patterns, wearing a black and white patchwork miniskirt with a colorful printed silk blouse.

Miller, meanwhile, chose a simple white shift dress emblazoned with the brand’s logo. Her hair was swept up in a very polished chignon.

Following up her Louis Vuitton moment at this month’s Met Gala, Stone (the brand’s newly minted celebrity ambassador) dazzled in a chic pair of sequined trousers, an argyle sweater and a blazer detailed with houndstooth-print accents.

All three women carried small Louis Vuitton bags and wore similar heeled shoes, decorated with gold metal hardware on the toe. The styles will likely be unveiled in stores next year, when the resort collection officially launches.

Last week, as Ghesquière was busy prepping for what would be his fifth resort show for Louis Vuitton, he took to Instagram to announce that he had renewed his contract with the French label, posting the hashtag #notgoinganywhere. Fashion fans cheered the news, considering the growing number of designer departures that have rocked the industry.

“I am very pleased to open the next chapter of the story I started with Louis Vuitton almost five years ago,” Ghesquière said in an official statement. “Balancing an incredible heritage with a constant quest for innovation has always been an essential part of my work. It is also at the center of the history of this company, and I look forward to further developing the codes we have implemented over the last years.”