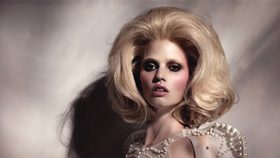 As a young girl in the early 80’s, I dreamed of having big hair. Not the puffy, lacquered, helmet-like hairdos of New York City socialites like Ivana Trump, but a glorious made-in-Hollywood mane of bouncy, feathered waves à la Farrah Fawcett. Alas, my small town hairdressers in New Jersey never quite succeeded at turning me into an Angel or a bombshell. It wasn’t their fault. We tried layers, perms, product, and prayers, but none of these could offset the fact that my locks just weren’t luxurious enough to whip into a frothy “Farrah Flip.”

My mother, on the other hand, had loads of glossy brunette hair, and every night would set her entire head with variously-sized rollers while my father and I watched TV. Immediately upon waking, she lightly combed out the curls, and, section by section, teased them into a frenzy with her baby-blue tail comb. The effect—a blend of Shirley Bassey meets Joan Collins—was a signature of hers through the years, and still an enduring beauty touchstone for me.

So, naturally, I was tickled to see the fall 2018 runways filled with more padded shoulders, power suiting, stirrup pants, and statement leather than the Palladium club on a Saturday night in 1988. Because when the 80’s return, epic hair must follow. Sure enough, at Miu Miu, Guido Palau whipped up voluminous and vertiginous beehive shapes, locked into place with buckets of Redken Forceful 23 Hairspray. Jeremy Scott’s Moschino show featured models like Kaia Gerber with flippy, structured bouffants. And the hair at Anna Sui was super-plumped and swept dramatically to one side.

The season’s biggest hair moment of all, however, has to be the enormous wigs the London-based stylist Sam McKnight created for Kendall Jenner and Bella Hadid for Dsquared2’s Western-inspired fall ad campaign, shot by Mert and Marcus. As McKnight explained to me, “The brief was Dolly Parton, so there was really only one way to go.” Each girl wore two strongly-set wigs, one on top of the other to create the exaggerated volume. “They loved it!” the stylist added.

Jimmy Paul, a New York-based stylist known for his prowess with massive manes, learned the importance of volume at a tender age from his hairstylist mother, Mary Pat. “She taught me how to tease, an important element of most of my big-hair styles,” said Paul. But his aha moment came while watching The Mike Douglas Show, a daytime talk show, as a kid.

“Raquel Welch came on, and blew my mind,” he recalled. “She was spectacularly beautiful, and wearing obviously fake hair—what looked like multiple hair pieces. I could tell, and I was around six years old. That moment changed something for me. I think I realized the power of an arresting appearance.”

When Paul arrived in New York City at the tail end of the 80’s, he frequented downtown clubs like The World, Pyramid Club, Danceteria, and Boy Bar. “I take a lot of inspiration from my club days,” he said. “Lady Bunny’s take on big hair and the whole Dusty in Memphis 60’s blond thing was a revelation. Big hair, I think, says that the culture is open to freedom of personal expression.”

Structurally speaking, however, the super-sized styles of the moment have little to do with the layered, product-heavy perms of the 80’s. “All that layering helped make it big without a lot of prep, and the sprays, mousses, and gels back then were really strong, which created that spiky, shiny look,” Paul explained. “Good prep is actually key to more contemporary volume—hot rollers or a curling iron are going to make it easier to tease, and of course it’s important to use the right products for your hair and the look you’re going for.” Paul uses Bumble and Bumble Thickening Hairspray to help prepare hair and Elnett Strong Hold hairspray (the European version) to hold it. “This combination is very soft,” he said. “It makes it very easy to brush out the hair and change it around, and keeps it looking clean.”

Like Paul, McKnight keeps his big coiffures au courant with lighter texture, adding movement to allow hair to breathe. “Or I go for something perfectly exaggerated and just plain weird,” he said, like the wigs for Kendall and Bella. In either case, he uses a tail comb for backcombing and “Easy-Up Do” from his product line, Hair by Sam McKnight.

So: Will big hair make its big comeback?

“It already has, but in a modern way,” McKnight declared. “We have been embracing natural, undone hair for a while now, and that includes curls, waves, and afros. Whereas before we worked to change a model’s hair to fit into one aesthetic, now, more often than not, we are emphasizing someone’s natural texture. So in essence, we aren’t fighting big hair anymore. We’re embracing it.”