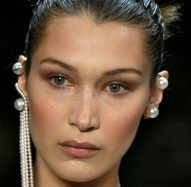 There are some hair accessory staples from the ’90s that we’re more than happy to say goodbye to.  We’re talking butterfly clips, hair glitter, and scrunchies. And right now, Prabal Gurung is bringing back a ’90s hair staple that we haven’t thought about since middle school. During the designer’s show at New York Fashion Week, Bella Hadid took to the runway wearing a stretch hair comb paired with a spiky bun.

This accessory just might worm its way back into our bathroom cabinets, because Prabal Gurung is one of the most exciting and innovative designers working right now. So if he’s telling us that this is the next big thing in hair, who are we to argue?

Anthony Turner, the lead hairstylist at Prabal Gurung, made a bold statement at New York Fashion Week with the addition of the stretch hair comb.

While those long, eye-catching pearls first got our attention, we quickly became nostalgic after seeing the stretch hair comb we used to wear on the daily.

We have a feeling these are just as painful and torturous to get out now as they were back in the day.  However, since there’s no denying that Prabal Gurung is at the forefront of fashion, we just might have to put aside our painful memories and give them another shot.