30 Times Celebrities Wore the Most Uncomfortable-Looking Shoes Ever 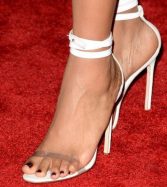 Every pair of heels Lady Gaga has ever worn.

What’s that old axiom? Ahh, yes, the cuter the shoe, the harder it is to walk in. Celebrities feel your pain, literally. Just yesterday Kristen Stewart removed her shoes on the Cannes red carpet and went the rest of the way barefoot. Who among us hasn’t done the same? Click through to see your favorite stars wearing some of the world’s most uncomfortable-looking shoes to ever exist.