25 celebrities who look completely different after dramatically transforming their hair 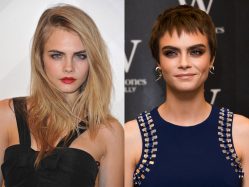 There’s nothing like a new hairstyle to completely overhaul your look, and celebrities are the masters of flawlessly switching up their appearance.

Celebrities like Kim Kardashian West and Justin Bieber prove that sometimes a simple new hair color can be enough to make a total transformation, while others like Miley Cyrus and Keke Palmer take a more drastic approach that leave an even bigger impression. Then there are actors like Alexander Skarsgård and Kate Hudson who make drastic changes to their hair to get into character for their latest roles.

Here are 25 celebrities who look completely different after changing up their hair.

Kate Hudson shocked everyone when she shaved off her long locks while filming a project with singer Sia in July 2017. She proved she can make any hairstyle look good, especially as it started to grow back into this super chic pixie cut.

Kate Gosselin looks like a different person with long hair.

Kate Gosselin’s original “I’d like to speak to the manager” cut is practically iconic, but her newly long, flowing locks are even better.

Lena Dunham has become known for shorter hairstyles ever since rising to prominence with her show “Girls,” but she looks equally great with shoulder-length hair paired with some blunt bangs.

Amber Rose is typically known for her shaved style, so the rare times she experiments with longer hair bring an unexpected but stunning twist on her look.

Kardashian West proved that a fresh color can give your hair a whole new life. She dyed her hair an icy shade of blonde in September 2017 and it completely transformed her look.

Before he became a star with his mega-hit “Blurred Lines,” Robin Thicke used to look almost unrecognizable with long, shoulder-length hair.

Kathy Griffin shaved her locks in solidarity with her sister.

Kathy Griffin had one of the biggest controversies of 2017 when she posed with a fake bloody Donald Trump mask, and she followed that up with a drastic new hair change. She shaved her hair in support of her sister who was undergoing chemotherapy.

Katy Perry had a big chop that totally changed the way she looks.

Katy Perry is no stranger to switching up her look, but this short pixie cut is her most drastic change to date. She opened up about her decision to change her hair during a 24-hour live stream to promote her album “Witness.”

She’s known for her signature blonde locks, but Britney Spears is actually a natural brunette. That’s probably why her darker color looked like a perfect fit when she surprised everyone with a new hue in February 2013.

You probably forgot that Justin Timberlake looked like this.

Justin Timberlake cut his curly locks for a shaved buzzcut when he kicked off his solo career, and the transformation has become his signature look. However, his tiny curls will forever be seen as a signature style of the ’90s.

Kristen Stewart chopped off her hair, and went from brunette to blonde.

Kristen Stewart shocked everyone when she traded her brunette locks for a blonde buzzcut while preparing for an upcoming movie, but the “Twilight” star effortlessly pulled it off.

Zoë Kravitz looks like a whole other person without her blonde braids.

Zoë Kravitz can rock basically any hairstyle, and her sleek, spiky ‘do from September 2017 was a chic way to switch up her look.

Alexander Skarsgård made an impression when he shaved part of his head.

Alexander Skarsgård left the internet divided when he shaved the top of his head in October 2017. Some people mocked his newly bald look, while others thought he would look good no matter what he did to his hair.

Keke Palmer made a bold choice by not only shaving her head, but dying it a vibrant shade of purple — and it clearly payed off.

Emma Stone lightened up her look with a Hollywood shade of blonde.

Emma Stone is typically known for her red hair, but she looked almost unrecognizable when she opted for a shade of light blonde.

Selena Gomez is a hair chameleon.

2017 was the year of massive hair transformations for Selena Gomez, who experimented with two wildly different looks. She started by chopping her long locks off into a lob before dying it a lovely shade of blonde later in the year.

Justin Bieber is another example of how a different hair color can completely change your appearance. He dyed his hair blonde during his 2015 comeback and it added a nice edge to his look.

Katie Holmes ditched her lob for a pixie cut.

Katie Holmes chopped off her signature shoulder-length hair for a shorter cut that still perfectly frames her face, and it makes her look very different from her “Dawson’s Creek” days.

Miley Cyrus had long, reddish-brown locks before she went short and blonde.

Miley Cyrus kicked off her post-Disney career by chopping off the long hair of her “Hannah Montana” days in favor of a blonde pixie cut.

Colin Farrell tends to go back and forth between short and shoulder-length hair, and both cuts completely transform his look.

Cara Delevingne switched up the length and color of her hair.

Cara Delevingne shaved her hair in early 2017 while filming a movie, and she looks almost completely unrecognizable now that it’s grown out into a super short pixie cut.

Emma Watson has changed up her look a fair amount over the last few years.

Emma Watson made it clear that she is very different from her character Hermione Granger when she chopped her hair into a short pixie cut. She’s also recently experimented with some baby bangs, helping kick off one of the biggest hair trends of 2018 so far.

Keanu Reeves may have had a less obvious transformation, but ditching his bangs changes his face shape.

Keanu Reeves’ transformation is another example of a simple trim completely changing someone’s look. His shorter hair adds a classic, clean-cut style, while his shaggy cut has a bit more of an edge.

The “Star Wars” actress walked the red carpet in March with a curly auburn ‘do, and the subtle change makes her look like a new person.