If a Trend Only Exists on Instagram, Does It Exist at All? 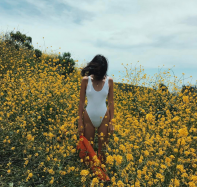 With Labor Day just around the corner and New York Fashion Week starting in exactly seven days, we regret to inform you that summer is officially over. Or at least that summer feeling is gone; the season won’t technically end until September 22, but you can say goodbye to those blissful four-hour Fridays at the office. With that, we’re reflecting on the summer’s biggest fashion takeaways before it all becomes a distant memory. Earlier this week, we charted how last year’s Spring ’17 collections predicted the summer’s most talked-about celebrity looks, from Bella Hadid’s low-rise jeans to Kendall Jenner’s giant Jacquemus sun hat. As for “real women,” Instagram has always been a helpful tool for seeing what they’re actually buying and wearing. So, we spent a few days scrolling through our feeds and came to the conclusion that the must-haves of Summer 2017 included a wooden clutch, a high-cut swimsuit, Lucite shoes, and an extreme crop top, among other things. But here’s our burning question: Did you see anyone actually wearing this stuff in real life?

We didn’t. And it comes down to matters of practicality. While these trends look good in a still, filtered, perfectly posed Instagram photo, they don’t always work for most women’s busy lives. I have a feeling a lot of girls out there have a trendy, impractical item in their wardrobe with the tags still on because they saw an influencer post it on Instagram, but they haven’t quite figured out how to wear it IRL. Maybe It girls and bloggers really do believe in these photogenic trends, or maybe they’re just “doing it for the ’gram.” Either way, it’s a curious phenomenon.

Here, we’ve broken down the summer’s top seen-on-Instagram trends and a few thoughts on their real-life applications. You be the judge and let us know if you’ve tried them out or think we’ll be seeing them again this time next year, too.

1) High-cut thong swimsuits, as seen on every Jenner and Kardashian.

Shopping for a swimsuit is hard work. Taking a good photo in one is even harder—especially when it’s cut above your hips and has a thong in the back. Sure, the girls who’ve pushed this trend have beyond-insane bodies—the Kardashians, the Jenners, the Hadids—but they know how to work the camera, too. A high-cut thong swimsuit looks a lot different when you aren’t striking the right pose, and it feels a lot more revealing in person. We’ve noticed most women here on the East Coast are wearing retro high-rise bikinis or simple, scoop-back maillots—cuts that are still sexy, but require a little less contortion.

2) Is underboob the new side boob?

Pumped-up cleavage was cool in the early ’00s, then “side boob” took over in the 2010s—and now we’ve moved on to the lower part of the breast, unromantically referred to as the “underboob.” The trend started out at Fendi Spring ’17 in the form of cropped sweaters with slits just under the breast, and turned up on influential women like Rihanna, Bella Hadid, and Kendall Jenner shortly afterwards. We’re all for showing off what you’ve got and have endorsed the braless movement, too, but underboob is a trend that sort of lacks any real-life functionality. You definitely can’t wear it to the office or out to dinner with your parents.

The Nadine Shirtdress and Large Gaia’s Ark in bamboo

If you follow a few—or a few dozen—fashion influencers on Instagram, you might just think a Cult Gaia bag was the only one worth having this summer. It’s near impossible to scroll through your feed without seeing the brand’s famous Ark clutch, which launched in 2016 and comes in natural bamboo as well as multicolored acrylics. It’s the kind of accessory that was—intentionally or not—made for Instagram, because it’s structured, statement-y, and goes perfectly with other “blogger” items like wrap dresses and gladiator sandals. The thing is, a wooden clutch also doesn’t collapse, so you can’t pack it in a suitcase, and there’s no shoulder strap—so wearability is pretty limited.

Once upon a time, Lucite heels were associated with “stripper shoes,” aka super high, chunky-platform stilettos, sometimes with floating glitter inside. Now, see-through shoes are sort of ironic-yet-charming. Yeezy has a few pairs of PVC heels and boots, which you’ve seen on Kim Kardashian and her sisters, and Maryam Nassir Zadeh’s plastic wedges in popsicle shades of orange, purple, and blue are even more photogenic. Whether or not you can wear them without getting a blister in the first few minutes is another story . . .

Thanks to Maria Grazia Chiuri at Dior, berets don’t just look cool, they’ve taken on feminist connotations, too. Rihanna wore Dior’s leather beret during Paris Fashion Week in March, and several brands have followed suit with their own versions—J.Crew even has a few wool berets out now. Wool is the operative word here: They’re not exactly a summer accessory, but that hasn’t stopped girls from wearing them with everything from Levi’s and T-shirts to ball gowns this season. Let’s at least wait until the leaves start to turn!

We aren’t quite sure when everyone decided to trade their Gucci Dionysus bags for $5 net sacks, but it’s likely an evolution of the nautical straw totes and baskets we’ve seen for a few years. Apparently, the proper term for the net sack is actually a “filet bag,” because it was originally used by French fishermen. We can endorse using one to carry groceries at Whole Foods, but if you’re intending to use a filet bag as an actual purse, you might lose your phone, keys, lipstick, and sunglasses in the process. Any bag that requires another bag inside (or a handful of pouches) is just a little too overwrought—though Staud makes one with a built-in leather bucket if you love the look and are willing to pay a steeper price.