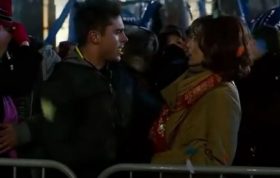 We can’t believe we’re saying this, but New Year’s Eve is right around the corner! Although we are currently drowning in gift guides and dreaming of the perfect Christmas nail art, we can’t forget about the most important countdown to midnight.

New Year’s Eve holds an infinite amount of possibilities, and nothing gets you more excited about a holiday than watching tons of movies, right? If you’ve already watched all the Christmas movies that are actually super dark, then you can sit down and watch these movies that have the perfect New Year’s Eve kiss. Although we can’t count High School Musical because Troy and Gabriella didn’t kiss at the party, we do suggest you start the marathon by watching HSM.

WARNING: These movies may cause you to have an unrealistic expectation about what your NYE night will be like.

It goes without saying that New Year’s Eve is one of the most iconic New Year’s Eve movies out there. Not only does it have a killer cast with Zac Efron, Lea Michele and Halle Berry, but the plot is super romantic.

Although there are a whole bunch of kisses that happen in this movie, the most memorable one happens between Paul (Zac) and Ingrid (Michelle Pfeiffer). After Paul helps Ingrid complete all of her New Year’s resolutions, they share an unexpected kiss as the ball drops.

This movie has double the romance and triple the fun. After going back and forth between Mark and Daniel, Bridget finally chooses to be with Mark. When they’re about to share their first kiss, Mark discovers Bridget’s diary and leaves her. Bridget rushes out into the snow after him and they share an unforgettable first kiss.

When Harry Met Sally is the perfect rom-com with the perfect kiss. After being on-again, off-again friends for TEN YEARS, the two finally admit their feelings for each other and have one of the best New Year’s Eve kisses ever. This movie gets bonus points for focusing on the topic of how men and women can be friends without having sexual tension.

This is one long-lost Ashton Kutcher movie that everyone should see. We get to watch Oliver and Emily fall in and out of love over the course of seven years. When their paths cross one final time, they realize that their key to success and happiness is each other.

This may not be the most romantic kiss in cinematic history, but it’s definitely one of the sweetest. While the Peanuts gang is celebrating New Year’s Eve, Charlie is attempting to finish his essay on War and Peace. Charlie attempts to do work while at the party but ends up falling asleep and misses counting down to midnight with his crush. While he is lamenting about his night, Marcie gives Charlie the cutest smooch in attempt to cheer him up.

This classic early ’00s movie is a must-watch. We get to see Hugh Grant in his prime as he falls for a single mother with a pre-teen son. He bonds with the son and over time, realizes that all he wants is to be a part of his family forever. The movie got an Oscar nomination for Best Adapted Screenplay, but it should have been nominated for sweetest New Year’s Eve kiss, too.