This Woman Transformed Into Kim Possible Using Her Hijab, and It’s Perfect 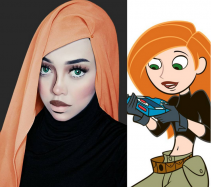 “Call me, beep me, if you wanna reach me . . . ” — these words (and the catchy tune!) are forever etched into the memories of kids who grew up watching Kim Possible on the Disney Channel. The teenage heroine was the original “girl who can do both” (ahem, cheerleading A+ student and badass crime fighter) and inspired us all — even if only to start wearing crop tops. It’s no wonder Insta-popular Malaysian makeup artist Saraswati, aka queenofluna, has featured the cartoon as her latest muse.

Saraswati, who you might remember blew up last year thanks to her Disney-inspired costumes, is known for creatively styling her hijab into her cosplay looks. She’s brilliantly proven you can still participate in the creativity of Halloween while staying true to modest fashion.

For her Kim look, she used an orange hijab to emulate the iconic red hair, wore green contacts to copy her eyes, and also drew on black lines to look more 2D. As if that weren’t impressive enough, she also did an homage to Kim Possible villain Shego. With a draped black hijab as Shego’s “hair,” she used bold black liner and green eye shadow all over her cheeks and nose for her spot-on re-creation.

“Today’s forecast: 100% chance of pain!” – Shego 💚🖤💚🖤 . . Thank you, guys, so much for all the love on my Kim Possible inspired makeup! Shoutout to the real KP @thechristycarlsonromano, omg thank you for your beautiful comment! It means the world to me hehe. 💖 . . Lenses: @colouredcontactsuk Green Goblin . . #shego #shegocosplay #drdrakken #kimpossible #kimpossiblecosplay #disney #disneymakeup #disneycosplay #ronstoppable #colouredcontacts #lenses #cosplayer

Saraswati even impressed Christy Carlson Romano, the original voice of Kim Possible (and star of another Disney hit, Even Stevens). “Love this! You look amazing 💕,” she wrote in the comments.

There’s more magic where these two looks came from. From The Nightmare Before Christmas, to Adventure Time, to every imaginable Disney character, Saraswati has done it all. Check it all out, ahead.

I’m super excited to be collaborating with the makeup students at the world famous @huxleyschoolofmakeup The students will be creating their own Good or Evil looks but we need your help to choose the Best one! 🙌😱🙌 . Here’s my creation, Princess Jasmine channeling her inner Jack Skellington. 👸🏽🎃 . . Lenses: @ttd_eye Snow Chocolate Jewellery: @lebellajewels . . . #huxleyschoolofmakeup #evilqueen #evilprincess #disneyprincess #princessjasmine #jackskellington #aladdin

Sally from The Nightmare Before Christmas Hijab Costume

Inspired by Betty Boop 💋💋 I glued my original eyebrows to make them invisible. I also painted my chin dark to camouflage it with my top, to make it look shorter lol. . . . . #bettyboop #booplove #retro #retromakeup #retrolook #classiccartoons #retrocartoon #cosplayer #facepainting #halloween #halloweenmakeup

Gamora 💚💚 Guardians of the Galaxy This was my second attempt. I had to use many types of eyeshadows for this look just like I did the others..not all but some. I tried using facepaint but the colours came out so strong and the green was too dark. Lips: @makeuprevolution Atomic serpent Hijab: @hijabjunkie . . . #gamora #guardiansofthegalaxy #marvel #marvelcomics #marvelvsdc #superheroine #zoesaldana #cosplaymakeup #cosplayer #malaysianmakeupartist #comicbook