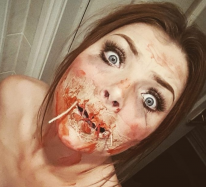 Halloween is a great time for experimenting with spooky makeup — and it’s also a good time for spooky pranks. Or, if you’re clever enough, the two can be combined in an ultimate makeup-related prank, as one woman achieved when she terrified her boyfriend with her truly frightening makeup.

Natalie Weaver, a UK-based beauty lover, decided to make it look like her lips were sewn shut with the use of liquid latex and face paint. The result is definitely bone-chilling, as proven by her boyfriend’s reaction when she surprised him in the middle of the night. To make things worse, Natalie stumbled into his bedroom while groaning, “My face! My face!”

Her boyfriend’s response went down in the exact way you might imagine — he immediately started screaming, completely flipping out. TBH, we don’t blame him, as Natalie’s makeup was pretty intense. Luckily, the whole thing was caught on video, making for a pretty hilarious 30 seconds.

Oh, and if you’re feeling bad for Natalie’s boyfriend, don’t worry too much. According to her Instagram, he later got in on the fun with a look of his own. Hey, if you can’t beat ’em, join ’em.

First ever attempt at doing anything like this🙈😂 #halloween #halloweenmakeup