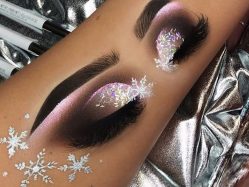 Whether you’re doing your makeup or drawing a portrait, you probably agree that the eyes are the most challenging part to master. But makeup artist Gabrielle Alexis has conquered the tricky facial feature in every respect.

In addition to doing professional-level eye makeup on herself and on others, she also draws out eyes on her forearm where she hones her beauty techniques. And the result is so realistic, you’ll hardly believe your eyes.

Alexis told INSIDER that her eye-drawing experience started when she was 13 years old — only then, her canvas was paper. It wasn’t until she came across a Pinterest post of a simple eye makeup look on a girl’s hand that she was inspired to try it out for herself.

Sometimes, she draws the eyes open.

And other times, she styles them closed and somehow makes the lashes appear three-dimensional.

Her process is surprisingly similar to how she does traditional eye makeup on her eyelids.

“Once I pass tracing out the eye and eyebrow shape, the steps to get a smokey eye or cut crease [are] exactly the same,” she said.

Each look takes two to four hours, but Alexis has seen the practice pay off when she does her makeup in real life.

“It has improved my technique tremendously and my blending! It’s easier to see what works and what doesn’t when I’m looking down at my work instead of looking in a mirror,” she said. “So when it comes down to doing my own eye makeup it’s a breeze!”

In each of her Instagram posts, Alexis shares which products she used to create her designs. It varies from look to look, but the makeup artist told INSIDER that she always turns to Anastasia Beverly Hills for the eyebrows, praising the brand’s entire line.

“Their Dipbrow and Brow Powder Duo goes on so well and blends perfectly with all on my eyebrow shapes I create,” she said.

Even on closer inspection, her brow strokes are feathery and realistic. And it’s partially due to a secret ingredient. Alexis said that she puts a drop of coconut oil in the Anastasia Dipbrow Pomade, which she applies using a thin eyeliner brush to create the “hair-like strokes.”

You can see more of Alexis’ mind-blowing makeup art on Instagram.