This Makeup Artist Can Make Herself Disappear 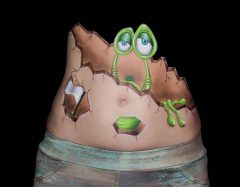 There are a lot of talented makeup artists out there today. And many of them are more than happy to give us all a peek inside their process via their Instagram pages or YouTube tutorials, allowing us non-professionals the opportunity to try to replicate their work at home. One particular makeup artist, however, has a pretty unique skill. Using makeup, she virtually makes herself disappear.

You read that right. Mirjana Kika Milosevic uses makeup to create striking illusions, including one in which she makes herself vanish before our very eyes. Check out her mesmerizing process in the video below:

Now you see her, now you don’t — this makeup artist makes herself disappear 😮

(via In The Know)

Milosevic’s skills are pretty impressive, and in addition to pulling off what appears to be a magic trick, she also uses makeup to transform herself into iconic characters, including the Grinch and the Joker, as well as into everyday items, such as a clothes hanger.

Milosevic posts her awesome looks on Instagram, where she has 172,000 followers. Here she is as Gru from “Despicable Me,” with a Christmas twist:

Zombies drinks beer too 😂💀🍺 Me in my favourit club @gajba_cafe Waiting for party on Halloween night and i will be your host 😉 Who is near Smederevo , come and let’s party with me 🎉 🎃 @creaturekitchenfxstudio @blacksclerashop #zombie #zombiemakeup #funny #art #spooky #scary #horror #halloween #halloweenparty #sfxmakeup #creative #crazy #artist #viral #video

This illusion that reduces Milosevic to half her torso will make you think your eyes must be playing tricks on you:

Using only makeup, she was able to give herself a teeny-tiny waist:

This Catwoman-inspired look is fierce:

And then there’s her homage to “Coco”:

One of her most stunning creations came about when she transformed herself into a wooden puppet doll. Watch how she does it in the creepy and unbelievable video below:

The video has been viewed more than 1.7 million times. It also made her the winner of the NYX Face Awards Serbia 2016 Optical Illusion Challenge. The whole transformation took about six hours, including breaks.

“I chose puppets [because] they always scared me in horror movies when I was a kid,” Milosevic told Refinery29. Although she makes it look effortless, Milosevic says her transformations can be a painstaking process. “I practiced all day to do [the] spring,” she said.