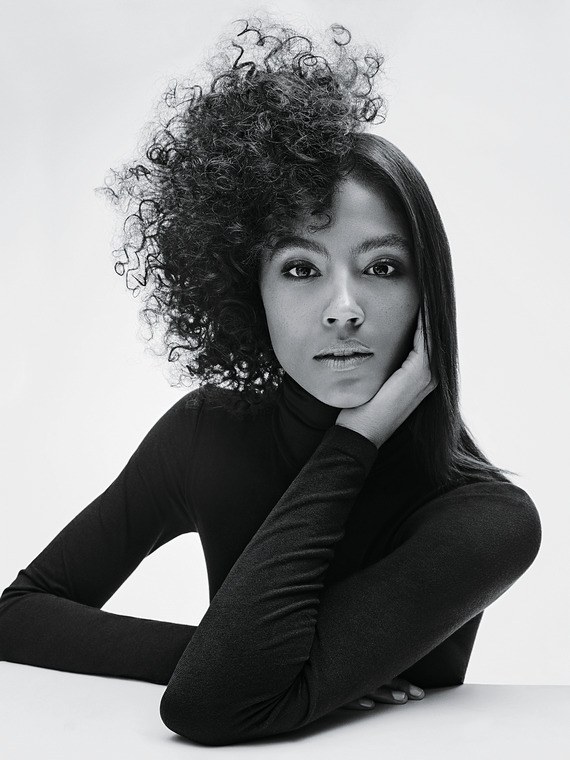 It was my first communion, and I wanted to look special. I’d never been to a hair salon, but after much begging, my mom took me to one in our small Canadian hippie town. I didn’t really know what I wanted. I was just happy to be there. The stylist kept feeling my hair, not saying much. She washed it and started brushing. My mom always brushed my hair with conditioner, and I didn’t know why, but I knew that whatever this lady was doing hurt. Then she pulled out every device in the place. It seemed like seven different machines went through my hair. Two hours later, we were finished. I wasn’t an image-conscious child, but I knew my hair looked bad. It was straight but puffy, a mix of punk rocker and Private Dancer–era Tina Turner. My mom had a baffled look when she saw the results but quickly wiped it away and said I looked “fab!” I didn’t believe her — and I didn’t go to another hair salon for over a decade.

My hair texture was a puzzle, one most professionals weren’t equipped to solve. My father is Guyanese, and my mother is Irish — and I mean Irish Irish: bright red hair, light eyes, lilting accent. Their three daughters wound up with three very different heads of hair — long, tight ringlets on my older sister; short, tight coils on my middle one; and then my own thin yet voluminous curls. My mom did her best, but she was a white woman and had never dealt with hair like ours. A low point: When my sister refused to sit through brushing for three weeks, the knots got so bad that my mom had no choice; the strike ended with a buzz cut. A few years later, that same sister begged to get her hair relaxed. My mother relented, but she didn’t realize that our mixed hair needed to be texturized first because it’s more fragile than most black hair. My sister’s hair broke off. My solution to the challenges was to make my hair as invisible as possible. I wore it in a tight ponytail until I was 18.

I never saw my curls as beautiful; I just saw them as different. My hometown was primarily white but still had two black salons; to have “black hair” was acknowledged and understood. My hair, though, wasn’t black. It also wasn’t white. And I had no one — not a salon, not even my mom — who could help me learn how to take care of it and embrace it. I felt most confident with my hair straight, less confident but acceptable in a ponytail — and under no circumstances would I wear my hair loose and curly. High school was the worst. I was constantly asked questions like “What does it look like down?” and “Do you have an Afro?” When I straightened it, people wanted to touch it and asked if it was “real.” I hated it.

Eleven years after my first communion, I tried again­ — I walked into a salon to get a blowout. This time: success. Not only did my hair become silky straight, but it straightened quite easily. Nevertheless, that salon charged me double the regular price because my hair was “more challenging.” I felt embarrassed. But I didn’t have a choice. My hair was too fragile for black salons, too “challenging” for white ones. If I wanted to get it done, I had to pick a downside.

In my mid-20s, I started modeling. My job now included people evaluating and working on my hair. This terrified me. So I got a blowout before every meeting and photo shoot. Early on, a fashion stylist asked what my natural hair looked like. I described it as fine but with voluminous curls. His response: “Sounds beautiful, but it would definitely scare clients.” That hairdresser back in my hometown had certainly looked fearful as she ran her hands through my seven-year-old curls, but this was the first time my hair had actually been called “scary.”

So in an effort not to alarm anyone­ — and to protect my delicate Guyanese-Irish hair­ — I spent a lot of money getting blowouts at salons that I knew could handle my hair. Because so many stylists on set, black and white­, just couldn’t. They didn’t know that mixed hair can under no circumstances be teased. That it has to be combed, never brushed. And that it requires heavy doses of heat protectant before straightening. I’ve had my hair teased so badly that three inches broke off and been on sets where the hairstylist doesn’t even own a comb. And I always bring my own heat protectant.

But then New York City humidity changed everything. I’d just moved to the city and­, of course, got a blowout before meeting with my new agency. On the walk from the salon to the office, my straight hair transformed into…something definitely not straight. I thought my big New York career was over before it started. Then one of the agents asked the unthinkable: “What does your hair look like curly?” I couldn’t answer. I was 26 and hadn’t left my hair down without heat styling for who knows how long. I agreed to come back the next day with my hair natural — after saying 16 different ways: “I don’t know what it will look like.” The next morning I found out. My curls dried bouncy and full. I loved them. So did the new agency.

I now wear my hair natural as often as I can. There are still challenges. The other day I was told that my natural hair was “just too exotic” for a client. But I don’t internalize the comments anymore. And I’m able to identify with other mixed models. We share the tricks we use to protect our fragile hair and speak up together about what it can and can’t take. Modeling has caused me emotional trauma over my hair, but it’s also brought out a confidence — not just in my hair, but in my blackness. I’m not overstating when I say: Embracing my hair changed my life.

These are the products that I — and my mixed-hair peers — swear by.

Treasured Locks H2G Hair Growth Shampoo With Emu Oil and Shea Butter. I shampoo only once a week and look for moisturizing formulas, like this one, that don’t strip the natural oils from my hair.

Mixed Chicks Deep Conditioner. After every shampoo, I gently comb a generous dollop from root to tip and leave it in for at least three minutes.

Innersense Quiet Calm Curl Control. I discovered this line when a fellow mixed-race model, Amanda Harvey, DM’ed me in response to an Instagram post about my dry, fragile hair. She swears by it, and I can see why. This light styling cream defines my curls without deflating them. I use it after I shampoo and also to revive my curls a few days later. I always apply it with “prayer hands,” lightly tapping the product into my hair with my fingertips.

Revive Procare Micro-Activ3 Treatment. My hair grows reaalllly slowly. This scalp treatment contains peptides, proteins, and caffeine. Three months ago, I started spraying it on my roots a couple of times a week, and my hair is growing so much faster. My sister’s used it for a year, and her hair is super full now.

A version of this article originally appeared in the August 2017 issue of Allure. To get your copy, head to newsstands or subscribe now.