DNA Braids Are the Prettiest, Most Scientific Way to Do Your Hair 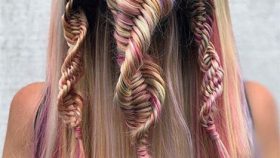 Paying attention in science class has never been more useful.

During festival season in April, “pipe braids” were *the* trending hairstyle that took over Instagram. Now, it seems there’s an equally mesmerizing braid that has found its way into your social media feeds: appropriately named the “DNA braid” thanks to its twisted helix design that resembles the nucleic acid.

The style is created by separating the hair into three sections, starting on one of the outermost pieces, taking a smaller section, and weaving it over and under the larger ones until it’s added to the opposite side.

Here’s a how-to (from hair wiz Alex Gaboury) for your viewing pleasure:

The process is then repeated on the other side, alternating back and forth until the braid is at the desired length. The trick is that the middle section remains stationary, and you’re only working with the outer two outer sections.

Sure, the DNA braid might seem daunting, but it’s actually pretty similar to a fishtail braid except it has three sections instead of two. It also requires a LOT of patience, but once you get into a rhythm you’re golden. Then, to finally achieve the helix finish, twist the three-strand braid to create the DNA-like spiral.

Hairstylist Alexandra Wilson wrote in her caption that smaller sections of hair make the style look more intricate, but you can also use larger pieces of hair if you prefer, like below:

Whether you’re a braid expert or novice, I think everyone can agree that DNA has never looked so gorgeous.