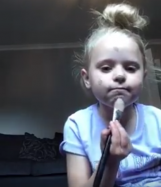 If you want to make your dreams come true, it’s never too early to start.

Evie Mitchell from Bellshill, Scotland, has launched a career as a budding famous makeup artist at just 5 years old by creating her first tutorial. Although it’s her first one, she pretty much has the lingo and the format down pat.

Evie’s mom Stephanie Menzies uploaded her tutorial to Facebook, which, according to Evie, she’s been waiting to do for “hundreds of years.” Menzies captions the video with, “Evie has been desperate for me to share this with everyone. It’s her first makeup tutorial, so she said everyone has to like, comment and subscribe to her videos.”

SEE ALSO: Get inspo for your new 2017 carefree makeup look from this terrifying kid

Menzies said that Evie’s dream is to move to America to and become a makeup artist. She’s even developed an American accent from watching so many videos.

“She watches a lot of girls from America her age on the YouTube kids app doing makeup tutorials and she’s just picked up the American accent from there. It’s really funny,” Menzies stated. “Evie doesn’t speak American until you hand her a bit of makeup or sit her in front of a mirror, she literally just turns the accent on and off it’s amazing how she does it.”

Just by watching her first tutorial, we can tell Evie has the skills and creativity it takes to be one of the Youtube artists we love and wish we could be. She has all the tools, the products, and the stage presence to capture an audience, and her final look isn’t half bad either. She even knows how to sign off from her videos, asking her viewers to subscribe and comment like any seasoned pro.

On Monday, Evie created another video thanking her fans for the sweet comments, and telling them to share her video with “all the people in the entire world.” A little self promotional, but hey, we can’t fault her for her hustle. That’s how things get done.

A message from Evie 😂❤️ she’s loving all this attention and comments! Thanks guys 😘

Oh, but just in case this whole makeup thing doesn’t work out for her, Evie says she’s cool with being a farmer.

Regardless of which awesome career path she chooses, looks like Evie is set to slay either game.

WATCH: Protect your face from sun damage with this portable awning