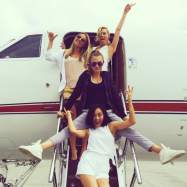 She’s appeared in box-office smash hits like “The Big Short” and “The Wolf of Wall Street.” She runs production company LuckyChap Entertainment with husband Tom Ackerley. She is the face of Calvin Klein’s fragrance, Deep Euphoria. She hangs out with supermodel and fellow “Suicide Squad” actress Cara Delevingne.

In a recent interview with Elle UK, Robbie talked self-care tricks for getting that Hollywood glow. But unlike some A-listers whose beauty regimens mirror their lavish lifestyles, Robbie’s beauty hacks are surprisingly down-to-earth.

1. Why use a blending sponge when a toothbrush works just as well?

To get a seamless camera-ready face, Robbie says she uses a toothbrush to blend her darker foundation into her blond hairline.

“I do that every single day, and every time my husband [Tom Ackerley] is like, ‘What are you doing?’ And I’m like, ‘I’m brushing my make-up into my hairline!’ And he’s like, ‘Girls are crazy,’” Robbie told the magazine.

Robbie believes lip balm is designed to dry out lips and keep consumers coming back for more. So instead of shelling out the small bucks for more lip balm, Robbie opts for diaper rash and breastfeeding ointment Bepanthen every time.

“I have a conspiracy theory that lip balms actually have additives in them to dry your lips out so you keep buying them,” Robbie said. “But because Bepanthen is just a cream for dry skin, it works. It’s what I’ve used my whole life.”

Shooting a film can mean working odd hours and for Robbie, sleep is paramount. During the 2016 filming of indie flick “The Terminal,” Robbie told Harper’s Bazaar she has tried all sorts of tricks, from melatonin to aromatherapy, to get better sleep. Her favorite is what she calls, the “beer shower.”

An ice cold beer and a hot shower is Robbie’s perfect remedy for a long work day.