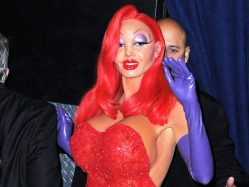 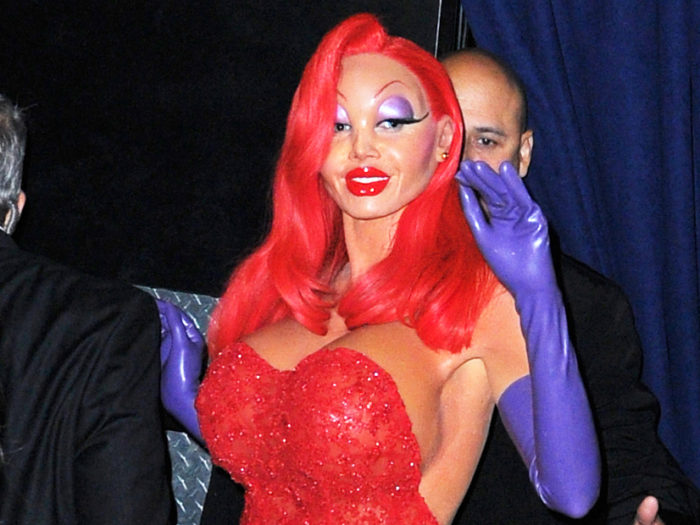 When it comes to Halloween costume ideas, we often look to celebrities for some major dress-up inspo. And even though the Hollywood set gets to walk the red carpet in elaborate ensembles more than just once a year, Halloween is still just as fun for them as it is for us mere mortals who aren’t fixtures on the step-and-repeat scene.

We know that Heidi Klum takes Halloween very seriously, but this Jessica Rabbit costume from 2015 may be her most iconic look yet. She really does look like the cartoon character, complete with exaggerated eyebrows and body curves.

When your kids are old enough to choose their own costumes … #HappyHalloween from my parrot & octopus!

For Halloween 2016, Jessica Simpson and hubby Eric Johnson dressed up as post-makeover Sandy and Danny from Grease, while their kids opted out of the theme and instead chose to be a parrot and an octopus.

Here’s another cute family costume! Beyoncé and Jay-Z dressed up as Barbie and Ken, while daughter Blue Ivy rocked a “Barbie” jacket and pink shirt in 2016.

Clowns Are People Too!

Scary! For Halloween 2016, Madonna dressed up as a creepy clown, looking very much like Pennywise from Stephen King’s horror classic It.

Kylie Jenner dressed up as Xtina from her “Dirrty” phrase—braids, chaps and all, in 2016.

Our costumes are really killin’ it this year, don’t you think? ☠️

For Halloween 2016, Halle Berry and her daughter Nahla went as skeletons.

My godson was a bee so I was a beekeeper.

In an offbeat choice, Mindy Kaling dressed up as a beekeeper for Halloween 2016. We think she looks bee-autiful!

Aww. Gisele and her son Benjamin look darling as Mario and Luigi during Halloween 2016.

In 2015, Fergie and then-husband Josh Duhamel dressed up as designer Karl Lagerfeld and his famous cat Choupette.

Ellen Degeneres never disappoints when it comes to celebrating Halloween on her talk show. For 2015, her costume was that of a long-lost Kardashian sister, “Karla.”

Ok last one I promise

So much glitter and sparkles! Jenna Dewan Tatum turned herself into a real-life unicorn for Halloween 2016.

You can be my wingman anytime.

We suspect that Zach Braff made many “wingman” jokes when he dressed up as Tom Cruise’s character from the 1986 movie Top Gun in 2016.

We’d like to think that Demi Lovato and Wilmer Valderrama spent Halloween 2014 in these Lucy and Ricky Ricardo costumes, exclaiming “Oh, Ricky” and “Luuu-cy!”

Billionaire Richard Branson was probably not the most obvious Halloween costume choice for Tyra Banks, but we are super-impressed that she pulled if off so well in 2015.

Khloé Kardashian gave Halle Berry a run for her money when she dressed up as the X-Men character Storm for Halloween 2016. Berry famously played the character onscreen.

Ode to my idol since I was a little girl The One & Only @Madonna. #Beautiful #Blonde #Icon #Legend #LikeAVirgin #BoyToy

Rocking Madonna’s trademark 1980s big hair and “Like a Virgin” getup, Paris Hilton’s 2013 Halloween costume was a total blast from the past.

Katy Perry and a mystery friend could have simply donned Hillary and Bill Clinton masks when they dressed up as the political duo in 2016, but instead, they took their costumes to the next level with some eerily realistic Halloween makeup.

NPH’s family always brings it when it comes to Halloween costumes, and 2016 was no exception! Harris and husband David Burtka dressed up like Charlie Chaplin, while kids Gideon and Harper went as fellow classic Hollywood stars James Dean and Marilyn Monroe.

20. Jessica Alba and her BFF

Romy and Michele’s High School Reunion is one of our fave movies to quote, and apparently Jessica Alba and her friend Kelly Sawyer are fans. The ladies dressed up as the movie’s title characters for Halloween in 2015.

I’m pretty sure there’s a lot more to life than being really, really good looking. And I plan on finding out what that is. – Derek Zoolander

Singer Joe Jonas nailed his “Blue Steel” impression when he dressed up as Derek Zoolander in 2014.