13 celebrities who have a septum piercing, in case you need a little inspo before taking the plunge 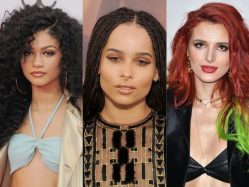 Once upon a time, septum piercings were considered edgy. Even in the punk and grunge communities where facial piercings were “the look,” going for a septum, especially as a woman, meant you were truly leaning into your inner weirdo. Times have changed, however, and even mainstream celebrities with septum piercings have become more commonplace. Nonetheless, pulling off and owning a septum piercing is still an impressive feat to be lauded.

Beyond wielding the confidence that you’ll never have a terrifying sneeze that jams in your piercing, you also have to know exactly which septum ring sizes, styles, and colors complement your face shape. As with most issues of style, accenting your features with an equally flattering and original septum ring is way easier said than done. So when people successfully pull it off, we take notice and then some.

Whether you’ve been personally donning the septum look for years, or you sit firmly in the camp that doesn’t like them, we think you’ll enjoy taking a gander through these celebrities who pull it off. Who knows, maybe one of these media darlings will inspire you to take the leap.

Without further adieu, here are 13 celebrities who wear the septum piercing with pride.

Skins been looking so much better recently 😍😍😍

Bella Thorne is no stranger to experimenting with jewelry and piercings, so it feels only natural that she’s firmly on team septum.

It’s hard to imagine Chloë Grace Moretz not fully committing to a style decision, so when she got her septum piercing last year she dived in with a small (but bold) gold ring.

One of my fav gifs of @Zendaya look at that septum piercing look at her hair look at her face look at the way she winks or idk what she’s doing omg I love her so much!!!! <3 @Zendaya pic.twitter.com/SlH1Ir3SrD

Zendaya doesn’t always wear her septum rings, but when she does, it’s gorgeous. She’s been committing to her piercing for a few years and showed it off during the 2014 American Music Awards. She ~is~ a style chameleon, so it makes sense that she’d get a septum piercing.

I am awake! Got to get out the door in 5 minutes. …Touché Eclat and Couture Brow to the rescue! @yslbeauty @voguemagazine #MorningRoutine

Anyone who has been following the Big Little Lies actress over the years knows that she’s the patron saint of collecting and trotting out stunning septum rings.

The darling Willow Smith learned how to express herself both artistically and style-wise at a very young age, and her septum piercing completely fits.

In her younger years, Madonna had a nose piercing for a good while (although it wasn’t a septum). In recent years, she resurrected the look in the form of a septum ring, and it holds up.

While she’s never committed to the needles in her nose, Riri has been known to rock decorative septum jewelry throughout the years. If she ever decides to commit, she’s already got this look in the bag.

I don’t always wear makeup, but when I do…I add glitter eyeliner. Lol✨✨✨✨ I had fun doing my makeup today. I hope everyone is having a great evening! ♥️🤗

The American Idol darling has killed it with a septum ring for years, but now, her slim gold ring is an integral part of her look.

MUVA does not play when it comes to her septum, and like her short platinum hair, it’s a bold and completely fitting statement.

call me if you think romance is dead. make up @daniel_s_makeup 🥀

It feels completely fitting that someone as rare, gorgeous, and uplifting as FKA Twigs has been working the circuit of artistic septum rings for a hot minute.

Lady Gaga with a septum piercing is everything>>> @ladygaga pic.twitter.com/MHfTaLdhgo

Lady Gaga, the pop queen of evolving looks, has had a septum piercing for a few years. Although, recently, she hasn’t shown off her rings as much. Given how much it suits her, we’re thinking it’s time for her to fully revive this look.

Much like Riri, Kylie Jenner has yet to take the leap and commit to a septum piercing. However, she did wear elaborate septum jewelry in a photo shoot for Elle, and the look kills.

Alica Keys has been rocking a septum on and off for a while, and if piercings were a democracy, we’d vote she wear it more often.

We hope this parade of chic septum piercings has inspired you to take whatever style leap your heart desires.