These 10 Halloween costume ideas are taking over the internet 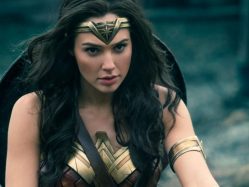 There are only a few days left in September, which means before you know it, it’ll be the most wonderful time of the year. No, not Christmas, we’re talking about Halloween. Yes! Halloween is just around the corner, and we’ve been spending hours and hours scouring the internet for costume ideas and inspiration. So far, we can’t decide if we’ll make a statement and show off our political views with a standout feminist costume, or we’ll let our zodiac sign dictate this year’s outfit — the options are endless.

With so many options, it can be hard to pick just one. But if you’re wondering what the most popular Halloween costumes are this year, then look no further. Fashion search platform Lyst has teamed up with Pinterest to bring us the most-searched-for costumes of 2017, and we think you’ll be surprised.

The two companies have combined and crunched their data to predict what everyone will be wearing this Halloween.

The bloodthirsty clown only re-emerged from the sewers of Maine and into cinemas earlier this month, but Pinterest saves for clown make-up and costume ideas are up 941%. Lyst has tracked fashion searches for exaggerated ruffled shoulder shirts and white gloves, and has noticed a 14% increase in searches for lace-up pom-pom sneakers in the last month.

Last year, Lyst predicted that everyone would be dressing as Eleven from Stranger Things, and with Season 2 set to air just before Halloween this year, the show remains a popular source of outfit inspiration. Pinterest saves on Stranger Things images are up 40 times over last year, but we predict more people will dress as the young boys this year; Lyst data shows searches for trucker caps and 1980s print tees are on the rise.

3. Belle from Beauty and the Beast

La La Land and Beauty and The Beast both caused spikes in searches for yellow dresses back in spring, and Pinterest has seen a 680% increase in pins for Beauty and the Beast characters. Belle’s iconic yellow tiered gown was also a key search trend around U.S. prom time, leading us to believe that people might re-wear their yellow dresses for Halloween. Belle’s blue apron dress, and cute Chip the teacup costumes, are also popular costume searches online.

While “sexy cat” remains a classic Halloween outfit choice, the giraffe looks set to be this year’s must-have Halloween costume. Saves on giraffe makeup and costume images are up nearly 1,200% over this time last year on Pinterest, and while there are less giraffe-print items available than leopard- or zebra-print, searches for “giraffe print” are up 27% on Lyst since June.

Shoppers are looking for some specific pieces on Lyst to get the Wonder Woman look: Searches for “red corset” are up 115% year on year, and sales of chunky gold cuffs are up 15% since June. There are also more than 230,000 Wonder Woman costume ideas saved on Pinterest right now.

Thanks to Daenerys Targaryen’s epic wardrobe this season, global searches for grecian gowns are up 30% YoY on Lyst, and searches for “light blue gown,” her favorite colorway, are up 160%. More than 400 people have just searched “Daenerys” in the fashion search bar space on Lyst this summer. Pinterest saves on “Khaleesi” looks are up 91% YoY. King of the North Jon Snow’s shaggy fur look is set to be a popular costume, too: Pinterest saves for Jon Snow are up 280% year on year, and Lyst is seeing around 4,000 searches a day for black and grey fur stoles right now.

This year’s revival of the Baywatch franchise has led to a 147% increase in related costume ideas on Pinterest compared to this time last year, and Lyst data shows global searches for red one-piece swimsuits increased 240% this summer.

The world is keen to embrace the swinging ’60s hippie spirit this Halloween and beyond. Searches for patterned flares are up over 150% since June, and Lyst has seen round-lens, colored sunglasses and flower crowns sell out. Hippie outfit idea saves are up 130% on Pinterest YoY.

The unicorn costume was a popular trend during festival season, and a top-saved costume on Pinterest last Halloween, and these looks are set to continue growing in popularity this year as well. Searches including “unicorn” are up 130% on Lyst since May, and +110% YoY on Pinterest. Unicorn headbands are the most-wanted unicorn fashion product globally right now. (!!!)

In the U.K., mermaids are already more popular than unicorns, and sexy sea siren looks are trending up globally. With more than 1.4 million saves on Pinterest and 8,000 searches a month globally for “mermaid leggings” on Lyst since July, you can expect to see a lot of mermaids at Halloween parties this year.

For more inspiration, you can scroll through the Pinterest boards created with these 10 costumes in mind. And the best part? None of these great costumes are even the tiniest bit offensive.