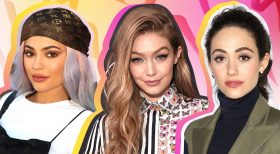 Though there are a lot of purists who believe that eyeliner should stay on your eyes, there are a lot of pros to multitasking your makeup products. Along with cutting costs by doubling (or tripling) a product’s use for different steps of your beauty routine, you’re saving valuable space in your makeup bag—something that’s crucial if you’re on the go or traveling and don’t have the room to lug around your entire vanity.

Even celebrities such as Kendall Jenner, Gigi Hadid, and Lindsay Lohan are known to multitask their products. Everyone loves a good beauty hack, even A-listers who can afford every high-end makeup product on the market. Can’t find the perfect black lipstick? Maybe Kylie Jenner has the trick for you. Take a look at 10 genius ways celebrities multitask their beauty products, ahead. Prepare for your mind to be blown.