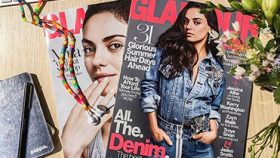 Going makeup-free in an Instagram selfie is one thing, but baring your face sans product on the pages of a magazine takes some next-level bravery. Yet more and more, stars are nixing not only Photoshop for their glossy spreads, but the statement-making cosmetics too, showing their fans exactly who they are beneath all that eyeliner, mascara, and rouge. Gisele Bündchen kicked off 2018 with a gorgeous makeup-free photoshoot in her home for Vogue Italia, while Christina Aguilera got a MAJOR make-under on the cover of Paper’s latest issue. Read on to find out who else slayed in print without a stitch of beauty product.

Christina Aguilera is back with a new #Transformation ✨ Click the link in our bio to read the full story and pre-order your issue now! 📸 @zoeygrossman Story by @agentlover Styling by @colinebach Hair by @robsalty Makeup by @kalikennedy

1. Christina Aguilera: Aguilera gave us her most shocking beauty transformation yet this month when she debuted her cover spread for Paper magazine. The shots, taken by Zoey Grossman, show a softer, gentler, freckled (!) X-tina. The result was nothing short of striking — between her flawless complexion and her piercing peepers, her natural beauty made us do a double take.

2. Gisele Bündchen: Her spread for Vogue Italia was not only makeup-free and shot in natural light, but there was no retouching, marking a historical first for the mag. The model, who usually keeps her home life private, also opened up on the vulnerability front by shooting at her house in Chestnut Hill, Massachusetts, giving fans what might have been the most accessible glimpse at her life yet.

Look what just landed on our desks! So thrilled to unveil August’s denim issue with Mila Kunis. The actress goes makeup-free on the back cover, and talks movies, marriage, and making babies. Tap the link in our bio to read our interview with Mila! (📷: Steven Pan, Stylist: Katie Mossman, Hair: Andy Lecompte at The Wall Group, Makeup: @muatraceylevy, Jumpsuit: @off____white, Earrings: @isabelmarant)

3. Mila Kunis: Kunis inspired Glamour’s whole editing team to ditch their cosmetics for the mag’s August 2016 issue when she posed without a stitch on the cover. It was nothing to the Bad Moms star, who said, “I don’t wear makeup. I don’t wash my hair every day… I’m just not that person.”

Vogue Spain Cover! We did this whole shoot without make up! Can’t wait for you to see it! @VogueSpain 📷 Theo Wenner @Theo123456 #KimNoFilter

4. Kim Kardashian West: The mom of three gave new meaning to the term, “#IWokeUpLikeThis” when she allowed Vogue España to shoot her, well, waking up, in 2015. “We did this whole shoot without makeup!” she gushed at the time via Instagram, revealing that some of the snaps were even taken mid-nap. The result was pure perfection, with even the reality star conceding it was her “favorite shoot” she’d done.

5. Alicia Keys: No shocker here: Alicia Keys, the veritable queen of no makeup, SLAYED her makeup-free cover for Allure last year. As she playfully reminded co-star Adam Levine when he “caught” her applying beauty products while taping The Voice, she DOES retain the right to wear makeup when she wants. “I’m not a slave to wearing makeup,” she told the outlet in her accompanying interview for the shot. “I’m not a slave to not wearing makeup, either. I get to choose at [any] given moment. That’s my right.”

6. Adele: Adele may be known for rocking one of the best cat eyes in the biz (find out how to get the look here), but back in 2015, she was rocking a far more toned-down look on the cover of Rolling Stone. It’s obvious there’s some makeup in play here, especially when compared with an actual, legit makeup-free video she posted while sick to apologize to fans for cancelled tour dates, but it’s still a far cry from the red carpet look we’re used to seeing from the “Hello” singer.

7. Rihanna: Riri shot no less than four covers for Dazed magazine with Harley Weir in 2017, most of which featured minimal to no makeup. Despite the success of the businesswoman’s own Fenty Beauty line, her mind was far more focused on her hair, which was worn in dreads for the shoot. “I want to look like Shirley Temple had dreads,” she told the publication.

I am so excited to share this @allure cover story. Ms @takishahair killed it in the hair department, right?!?! It was a very special shoot ALL AROUND. #grateful 🙏🏾 Check out the article and photos with the link in my bio. AND you can pick up a copy of the magazine TODAY! http://bit.ly/2ypI0bw Photos @sharifhamza

8. Kerry Washington: In a complete 180 from her character’s “perfect” exterior, which the Scandal star says is achieved with constant attention from hair and makeup artists on set, Washington went for natural hair AND makeup for her October 2017 cover shoot for Allure. For the mother of two, it was another way for her to help teach her kids about their own natural beauty. “I like to wear my natural [hair] texture, especially now because I have children and I want them to know that their hair is perfect as it is,” she said. “They don’t have to change it or straighten it. They can, but they don’t have to.”

9. Nina Dobrev: Every year, People magazine does a “World’s Most Beautiful Without Makeup” spread, and last year, Dobrev was one such stunning face. “Go bare or go home,” she wrote.

I love this cover. Thx u @WMag! Such an honor to be named Royalty alongside this insanely talented group…I always thought I was a queen (haha) #DreamComeTrue 👑 #TheRoyals

10. Priyanka Chopra: Chopra’s 2016 W cover look wasn’t too far off from the one she wears in everyday life, with the Quantico star telling the mag it takes her no less than 10 minutes to get ready. “I finish my shower, put on lipstick, mascara, and the easiest outfit (which is probably some sort of onesie), my hair is up or it falls into place,” she says.

Which celeb do you think does the no makeup look best? Sound off over @BritandCo.