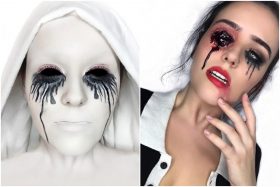 Halloween 2017 is approaching, and if you’re still brainstorming creepy costume ideas (but don’t want to be one of hundreds of Pennywise figures roaming the streets), take a cue from American Horror Story. Unlike It, AHS offers plenty of terrifying seasons — and therefore, way more looks to recreate. And recently, one makeup artist copied some of the most recognizable moments from the show in a series of Tweets that will live in your nightmares.

MUA Erica Crist recently took to her Twitter feed to share some recent work with her followers. “American horror story inspired makeup thread,” she wrote, punctuating it with a spooky ghost emoji. She proceeded to post moments from AHS: Murder House, Asylum, and Coven. Honestly, we can’t decide whether her recreation of Moira O’Hara or Cordelia Foxx is creepier, but suffice to say they’ll all serve to terrify come October 31.

While Erica hasn’t posted step-by-step tutorials of her eerie looks yet, her fans just might convince her with requests for YouTube videos.

“More are coming, trust me,” she Tweeted ominously. We can’t wait to see what she recreates next (and maybe she’ll even toss in some Next Supreme highlighter for good measure. Check out her hair-raising AHS series below:

You should 100% do makeup tutorials for these looks on your YouTube channel!!