From Elizabeth I to high fashion, the tales behind Game of Thrones’ costumes 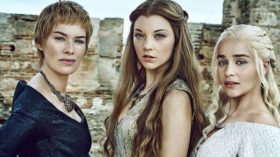 Game of Thrones, which returns today for its seventh season, offers fantasy, horror and intrigue, and, as Sarah Mower has put it, shines a light on “our cynical, sophisticated, brutal, hopeless new Dark Ages”. It is also great fun to watch as a fashion expert, whether you are a “pedant” who needs everything to be historically correct, or a “swooner” who doesn’t mind if it is not.

The show is infamous for its ability to brutally shock audiences. Such visceral, sensorial overload can mean that the breathtaking beauty of the costumes — and especially Michele Carragher’s stunning embroidery – is sometimes lost on viewers.

Whether a particular influence was the designer’s intention or not is, in many respects, unimportant. As with literary analysis, television dramas are an art form open to interpretation.

The circumstances of Sansa Stark’s second wedding to Ramsay Bolton in season five are dark and traumatic. Her groom is a psychopath and her terror as she walks towards him is palpable. Her dress is threaded with reminders of her past life and family, but it also has some very unexpected influences.

To me, the sculptural sleeves of the bodice, a moulded extension of the body of the dress (which was intended to look somewhat like the statues in the crypt at Winterfell, her ancestral home) are reminiscent of 1960s cape coats with their fluid body and high neck.

An especially useful comparison is a 1963 design from the French fashion house Balenciaga, which has a very similar upper-body silhouette. Sansa’s undersleeves, meanwhile, correspond to the 19th-century “bishop” style – a lightweight sleeve, full to the wrist, where it is gathered into a cuff. This could be seen from around 1810 until the early years of the 20th century. In Sansa’s dress it provides a softer edge to a rather severe and encased design. Cersei Lannister’s dress at the fateful wedding of her son, King Joffrey, in season four embodies many of the staples of “fantasy” costume: long flowing sleeves, emblematic embroidery, a trained skirt. These aspects often fall under the pseudo-medieval banner and indeed this era was on Clapton’s radar when designing the costumes.

More recently, Cersei’s dress also recalls the appropriately royal costume of Queen Elizabeth I in the 16th century. The portrait of Elizabeth I as princess from around 1546 is a beautiful example of the Tudor silhouette: a low, almost off-the-shoulder neckline, a long slender torso, voluminous oversleeves, gold trimming and ornamentation, and a rich colour scheme.

The way women held themselves in these dresses, with clasped hands in front of the waist (helping to show off those sleeves), can also be seen in Cersei when she wears her dress. The style both empowers and constrains women.

On the one hand it has an armour-like appearance that might suggest strength and perseverance against the world. On the other, the hampering skirts, sleeves and constraining bodice could imply the very opposite. Clapton has said of Cersei: “I don’t know how strong she is really, but she wants to project that image.” Self-professed “Stormborn, Mother of Dragons” and other titles too numerous to mention, Daenerys Targaryen is given some of the most striking costumes of the series. Her costumes sit somewhere between Lord of the Rings’ ethereal royal elf Galadriel and the angular lines of Star Trek uniforms. By the most recent series they had evolved to portray – in Clapton’s words – “this sense of power and also a sense of immortality … this rather untouchable [quality and] a removal from reality”.

With Daenerys’s insatiable wish to power forward in life, coupled with her constant re-invention of herself, it is perhaps unexpected that her clothes should have any strong historical connections.

Quite a few of her costumes appear to be influenced by the iconic pleated dresses of Spanish-born Mariano Fortuny, one of the most important designers of the 20th century. His innovative rolled pleated technique (patented in 1909) recalled the classical statues of ancient Greece and Rome. Similarly pleated skirts, reaching to the floor, can be seen on a number of Daenerys’s garments and give softness to an often rather harsh ensemble. The connotation of ancient Greece and Rome is an appropriate one for this burgeoning queen, who aims to build empires and tame mythological beasts.

Fortuny’s gowns were also associated with rational and aesthetic dress advocates in the 20th century, who argued for practical yet attractive female clothing. Likewise Daenerys wears trousers under every dress. Clapton has said: “I like that sense of, ‘I can play this [queen] but underneath, I can run’.”

Clapton retired from Game of Thrones after five series, having completed, in her words, “a complete look” for the show’s diverse geographic regions. She left not only a complete “look”, but also a complete mood board of historical influences for successors to draw on. As we move into the seventh season, it will be interesting for eagle-eyed viewers to spot and enjoy new parallels.

This article originally appeared on The Conversation.