Why is armpit hair on women such a big deal? 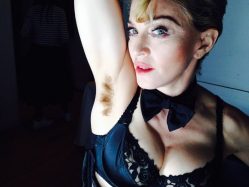 WHAT do you think of when you see this picture of Madonna and child?

I see the beautiful loving bond between a mother and her daughter. Lots of people, however, saw something else entirely when Madonna posted it on her Instagram recently.

They simply could not see past the hairy armpit of Lourdes Leon.

Lourdes, of course, is no longer a child. Now 21, she can do whatever she wants. Which includes not shaving her armpits.

The strikingly beautiful Lourdes Leon exudes cool nonchalance in this picture. She isn’t afraid to beam with delight at the enveloping hug from her mum, at the same time as revealing her hirsute armpit without so much as a blush. She has clearly inherited her mum’s renowned unapologetic, “give no f***s” attitude; the attitude that has made her the world’s most enduring global superstar for well over three decades.

Every time I see a picture of Lourdes, the first thing I notice is never her armpits (which are often hairy) — but her eyes. She has that same unique look as her mother; the glare that gives zero f***s at the same time as harbouring world domination: a stare of strength, confidence, composure and ambition.

But some people miss all this wonder because they’d rather focus on a hairy pit. “Is it possible to unsee a picture?” wrote one (male) Twitter user. “Ewww” wrote another male, in response to Madonna’s post. It wasn’t just the men. One woman wrote how she’s “not ready for armpit hair to be the next big thing.” Others implored Madonna, as a mother, to tell her daughter to shave for the picture.

I looked at the Twitter profiles of some of these haters. Some describe themselves as “proud parents.” What are they telling their own daughters, as they troll somebody else’s?

Do they heap shame on their daughters for breaking the mould, being different or refusing to partake in time-consuming, pricey and often painful ‘beauty’ treatments, such as hair removal? Do they pressure them into making themselves look sexually available, girl-like and attractive to the male gaze?

Many women shave their armpits simply because they want to, and feel more confident that way. Shaved or unshaved: who are we to judge?

Except, I confess, I do judge the unshaved woman. I judge her to be interesting, defiant and independent. The female hairy armpit is the ultimate symbol of both feminism and sexiness. Which, I’d wager, is why it confronts so many people. They wouldn’t usually put those two things together. It confuses them.

It may be none of those things; not every female choice is a statement. It may be that she just didn’t get around to shaving them. Simple as. Nothing to see here. Move along.

I spoke to Kirstie Clements, who was Editor-in-Chief of Vogue for over a decade and is now Chief Creative Officer at Porte-à-Vie designer lingerie. “I love that picture — she looks gorgeous”, she tells me. “In the 1970s, you actually did see hairy armpits on women every now and then. They were more of a feminist statement,” she says.

As for the should-they/shouldn’t they debate, she says: “Why not? Like everything in life, it depends on the armpit!”

The first time I remember a hairy armpit was on Julia Roberts at the 1999 London premiere of her film Notting Hill. It caused quite a stir. But in me for different reasons: it immediately transformed how I viewed her.

I went from paying her little attention as a ‘chick-flick’ actor to suddenly seeing a more complex woman, and revisiting her films such as Erin Brockovich, realising I’d misjudged her.

As Clements tells RendezView: “In my early career I shot Cate Blanchett in Valentino evening wear for Vogue with hair under her armpits. She was shooting for Elizabeth at the time and pointed out that in those days, women had hairy armpits. It would’ve helped absorb the perspiration in those huge gowns. We didn’t airbrush it out — it was a nice thing to point out in the copy.”

But hair removal has a long history too.

Qualified beauty therapist Mel Von Stanke says: “Ancient history reveals evidence of flint stones used for removing body hair, even talk of depilatories being used as well as pumice stones and tweezers made from shells. As early as 1800, advertisements for powders and creams to ‘take off all unnecessary hair’ appeared in newspapers. There’s also indication of Egyptian women using the sugaring hair removal method.”

I’ll never judge a woman for the choices she makes. But if she sports a hairy pit in a gown with a nonchalant look in her eyes, I’ll always secretly and enthusiastically approve.